Among all the artworks covering a floral topic, you won’t find anything more popular than rose tattoos. They are designs of choice for, of course, women and men. The rose flower is mainly a symbol of Love in its purest form, this meaning applies to a tattoo with such drawing. However, it is not the only interpretation a spiky flower can have. Honestly speaking, body drawings with this flower (no matter how big they are, where they are placed on a body, and their color solutions) are probably one of the most overloaded with symbolism and variety of meanings, which had always been constantly changing depending on a culture, social norms, historical period etc.

Due to the influence of all mentioned factors and a lot of others the rose tattoo has probably one of the most interesting history comparing to other symbols. There were a lot of different periods when a tattoo of this flower had served rather unpredictable roles, usage, and meanings. For example, during Middle Ages rose flower tattoo was made for prisoners sentenced to death. Another reference to this epoch is connected with a forgotten science, alchemy. Alchemists used the tattoo to once and for all overcome base human impulses and obsessions is used to mean the spirit Renaissance after death.

In European culture, the image of a rose is associated with a figure of Virgin Mary, sometimes compared with the flower. Another religious, Christian in particular, the subtext is a metaphor based on an association of falling rose petals with falling blood drops of Jesus.

In Japan, such tattoo is a direct symbol of the authority, power, pride, and tenderness. For Chinese people, the rose tattoo has a special meaning – it stands for prosperity and risky pleasures. Another implication of the tattoo symbol in the East is the embodiment of masculine and feminine energies, yin and yang. In Ancient Egypt, the flower was associated with Isis, Goddess of feminity and maternity.

The range of meanings of a rose tattoo is so wide, that even some tiniest details and elements have their own content influencing the whole design. Straight stern of the flower with no damage is a symbol of persistence. Leafs are associated with joy had happiness. A bud means glory and fame. Spikes – sadness, gloom or even depression. A combination of a half-blossoming rose bud and sharp spikes is interpreted as the fragile feminity and at the same time power and strength. Often, a real picture of a flower is taken as a tattoo idea.

Colours of rose tattoos are also a matter of a great importance. White rose traditionally symbolises innocence. Pink colour stands for an eternal gratitude. The red rose is always connected with a passionate love. Blue rose tattoo is a body drawing for remarkable and bright people, trying to accomplish impossible aims. Black rose implies to such dark phenomena as death, sadness, and mysticism.

The symbol of the rose is one of the most popular (especially traditional designs) with a wide spectre of absolutely different meanings, that’s why there are really many of rose tattoos of different styles and we gathered only the best of them created lately. 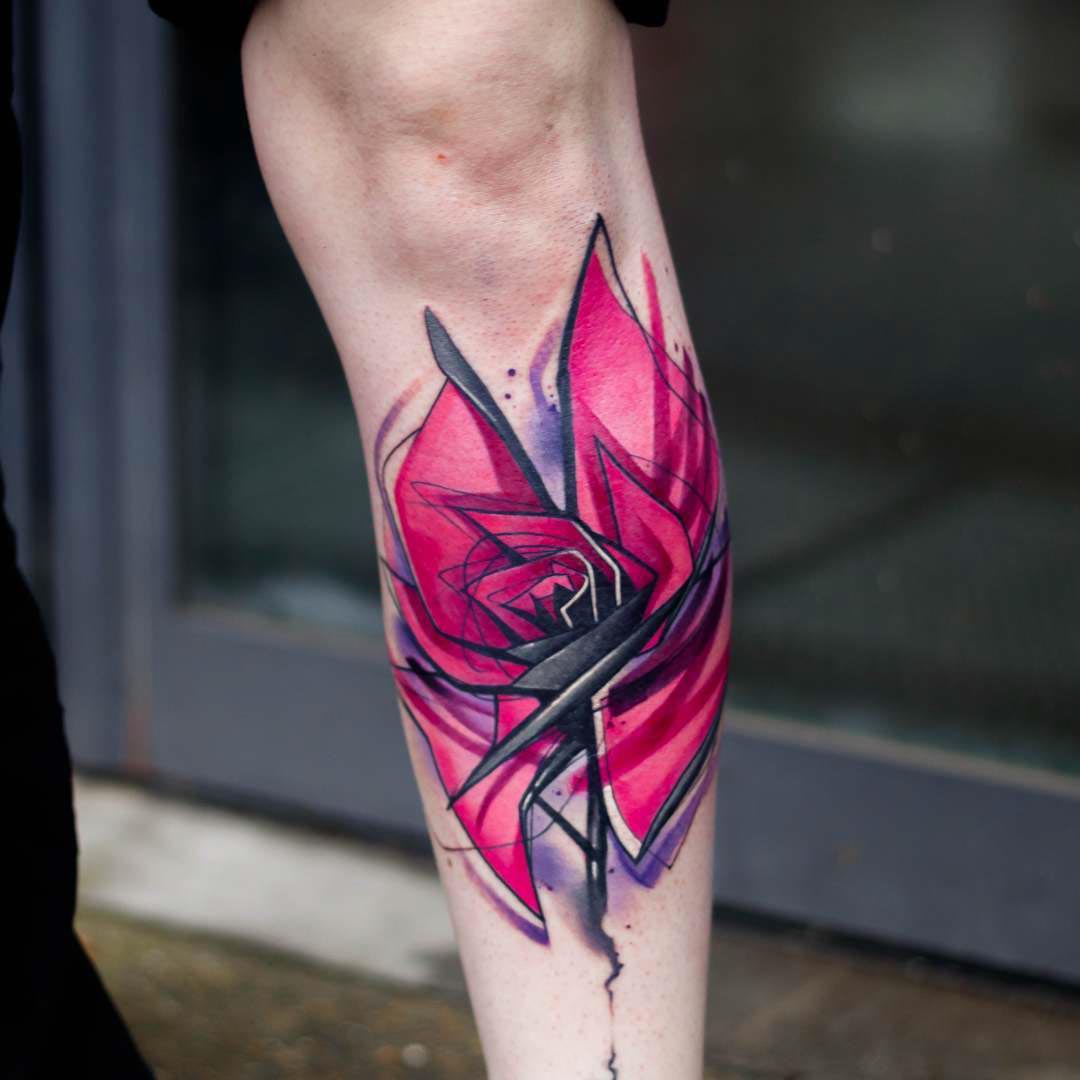 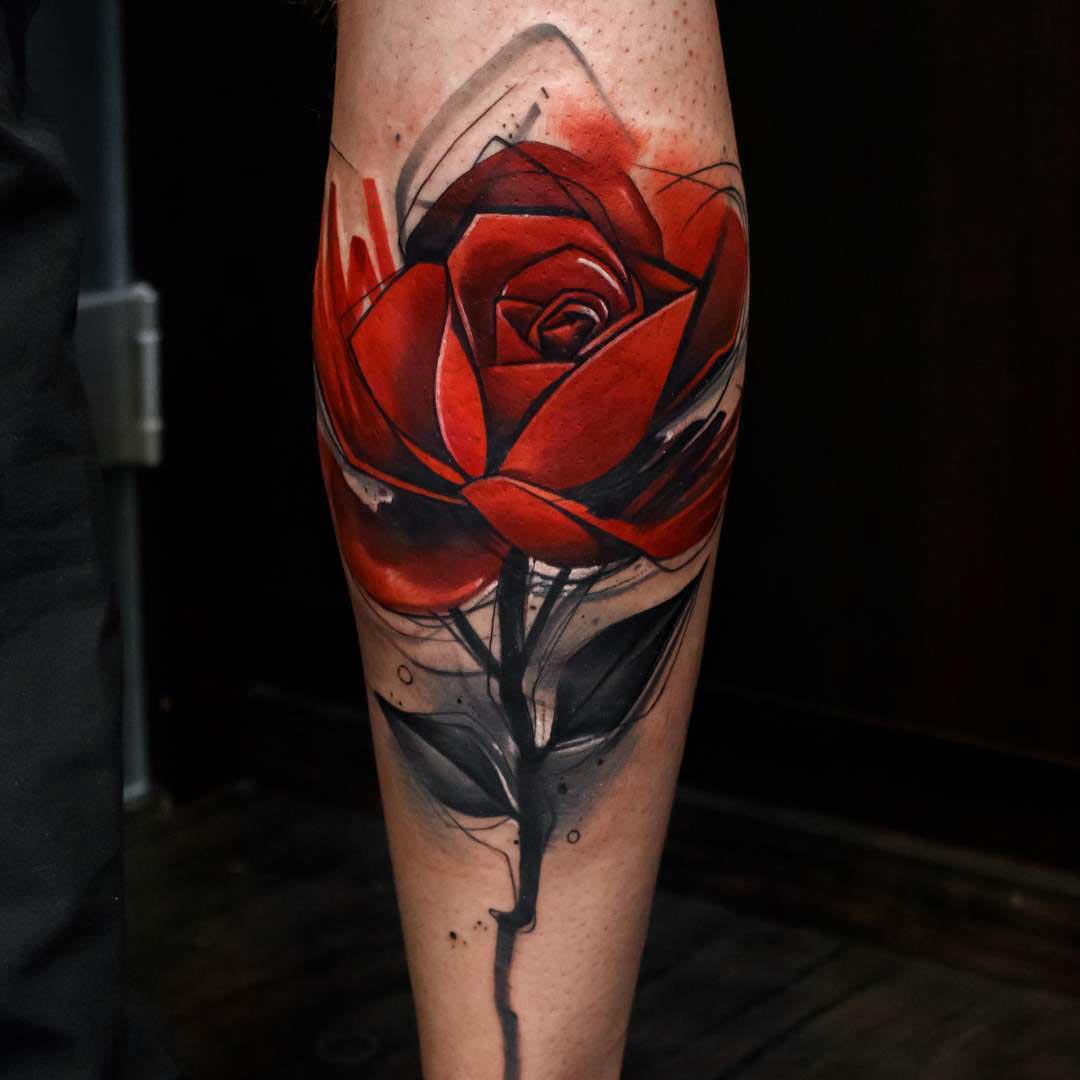 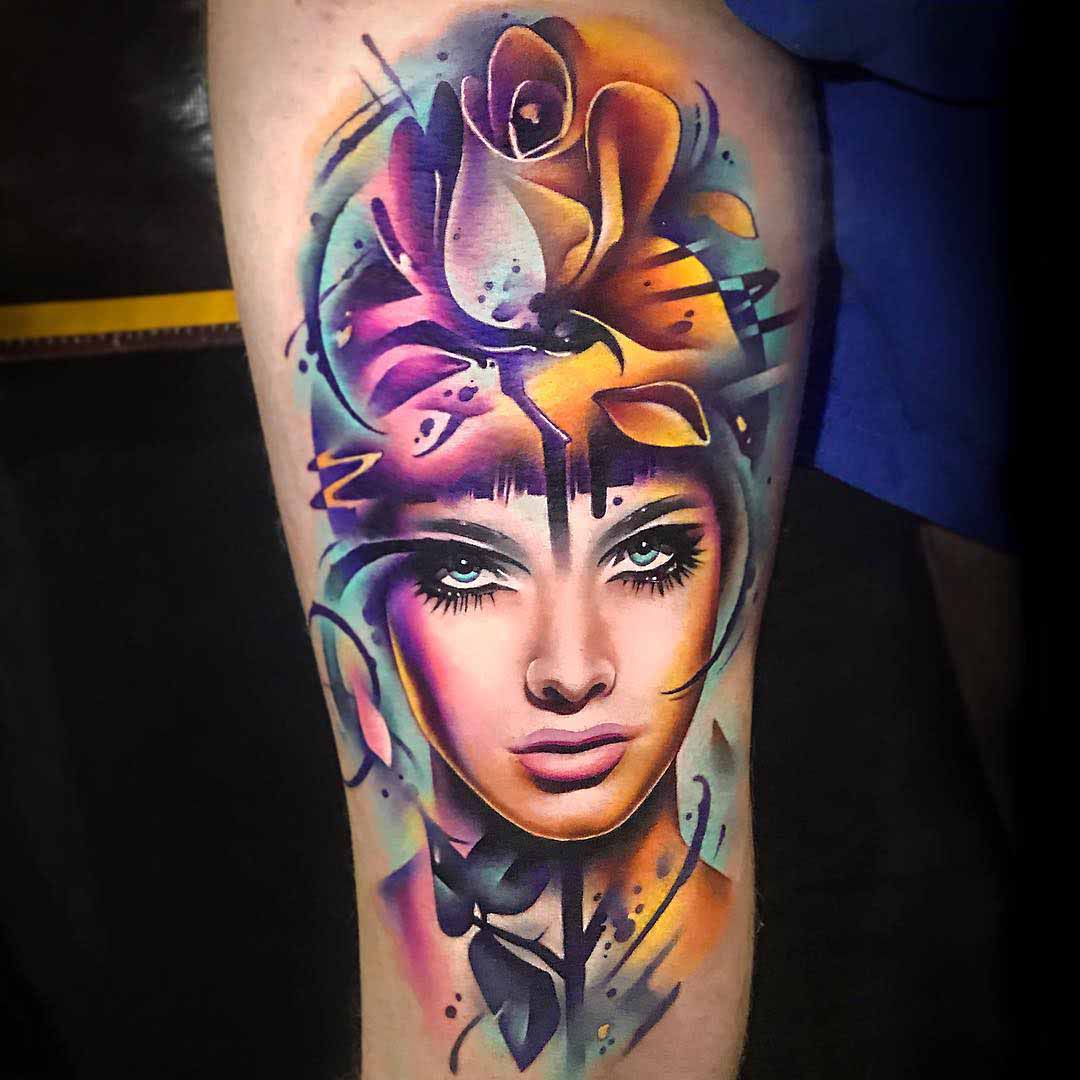 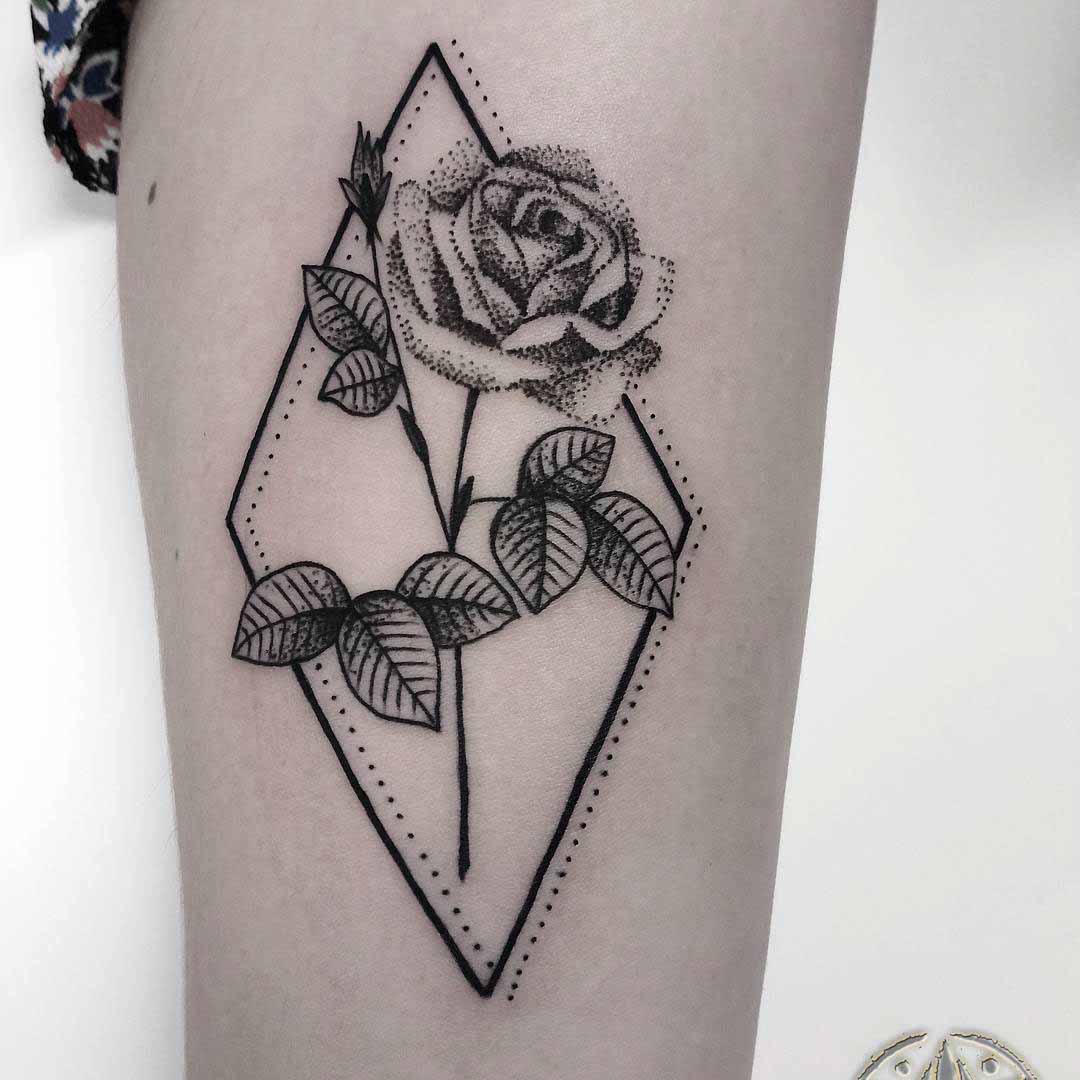 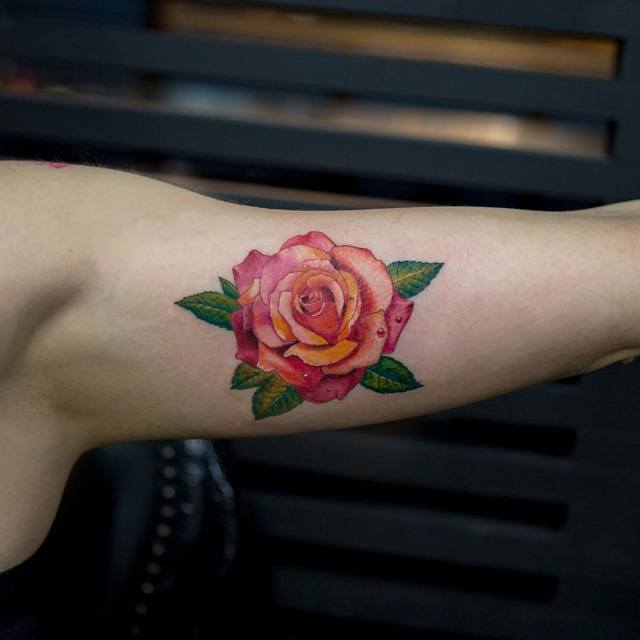 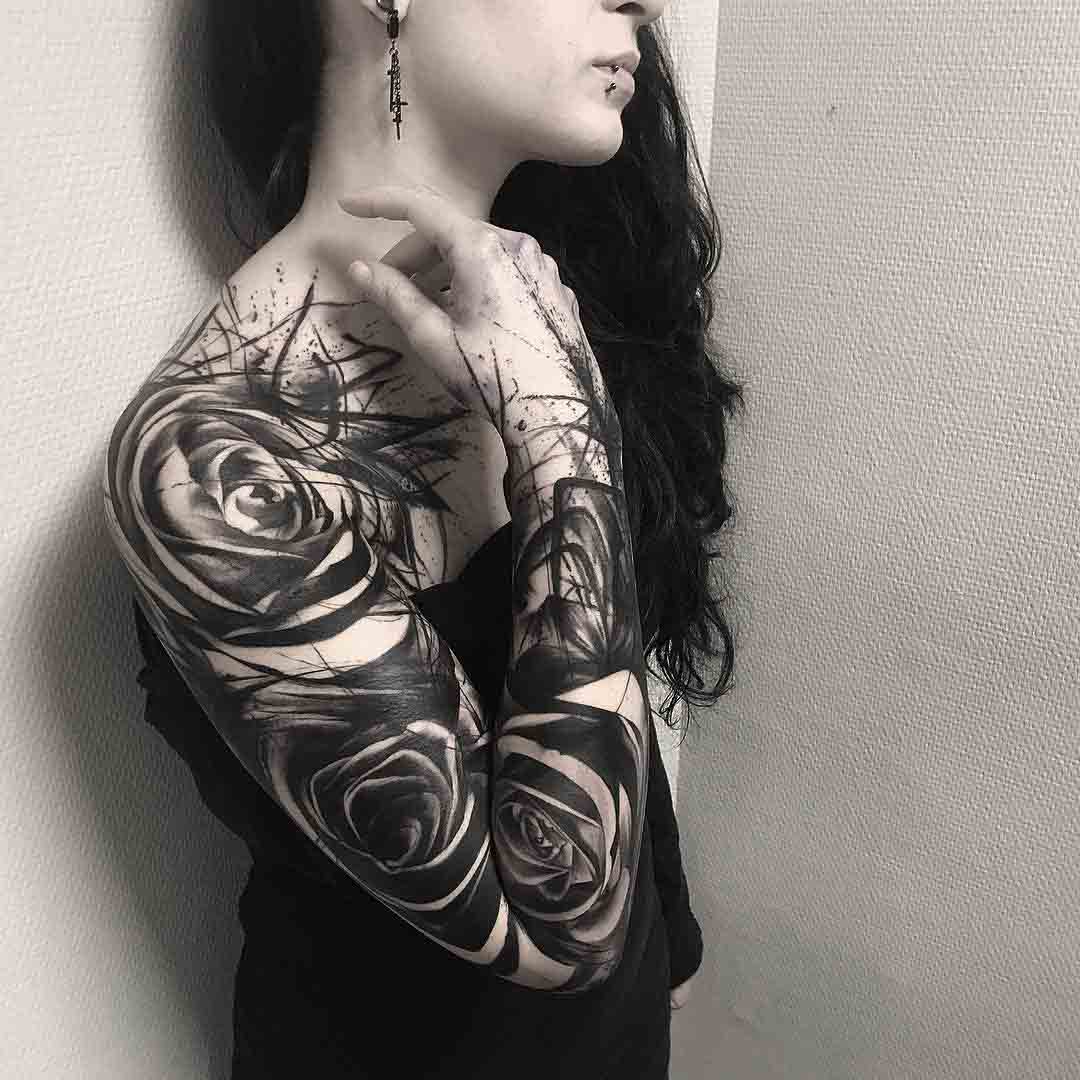 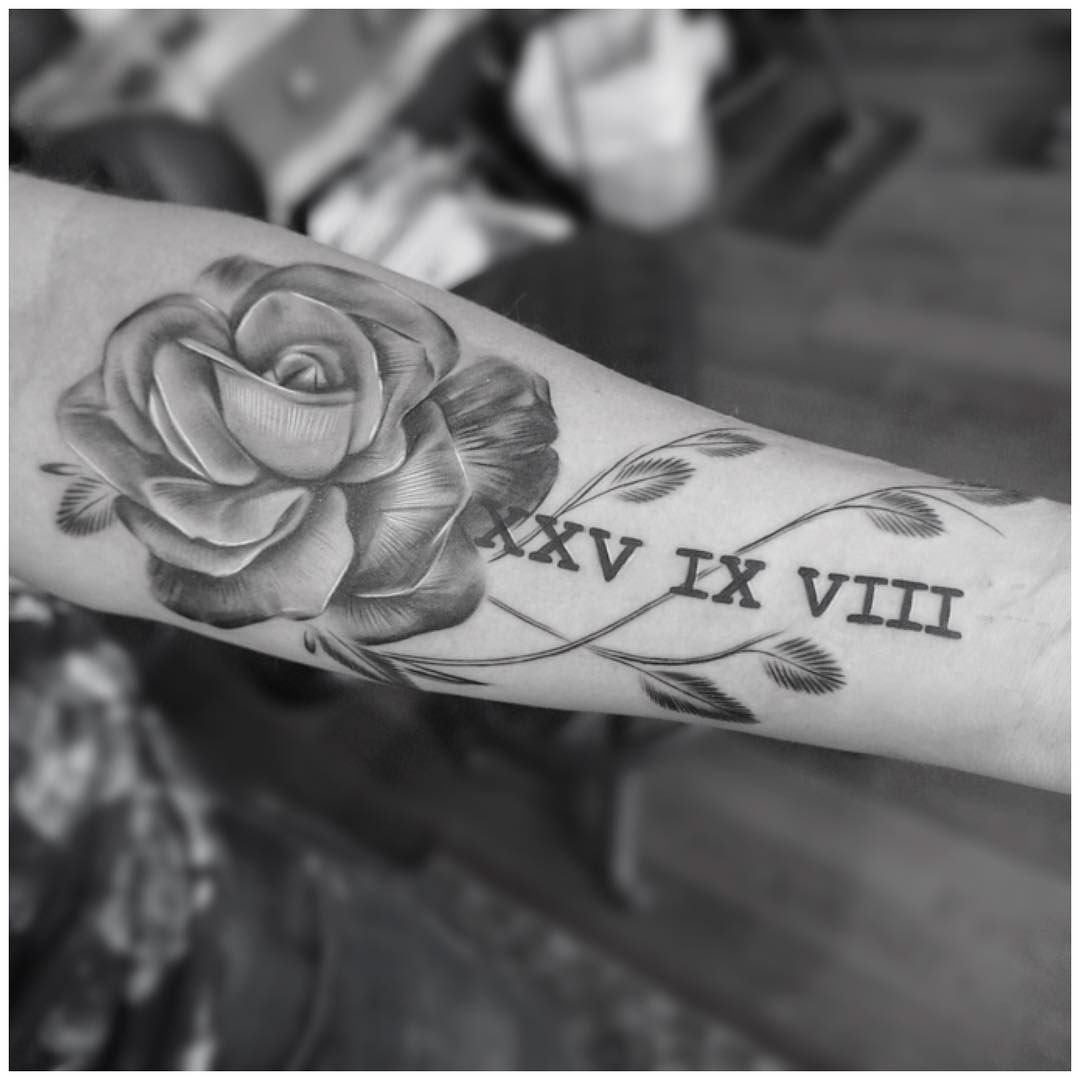 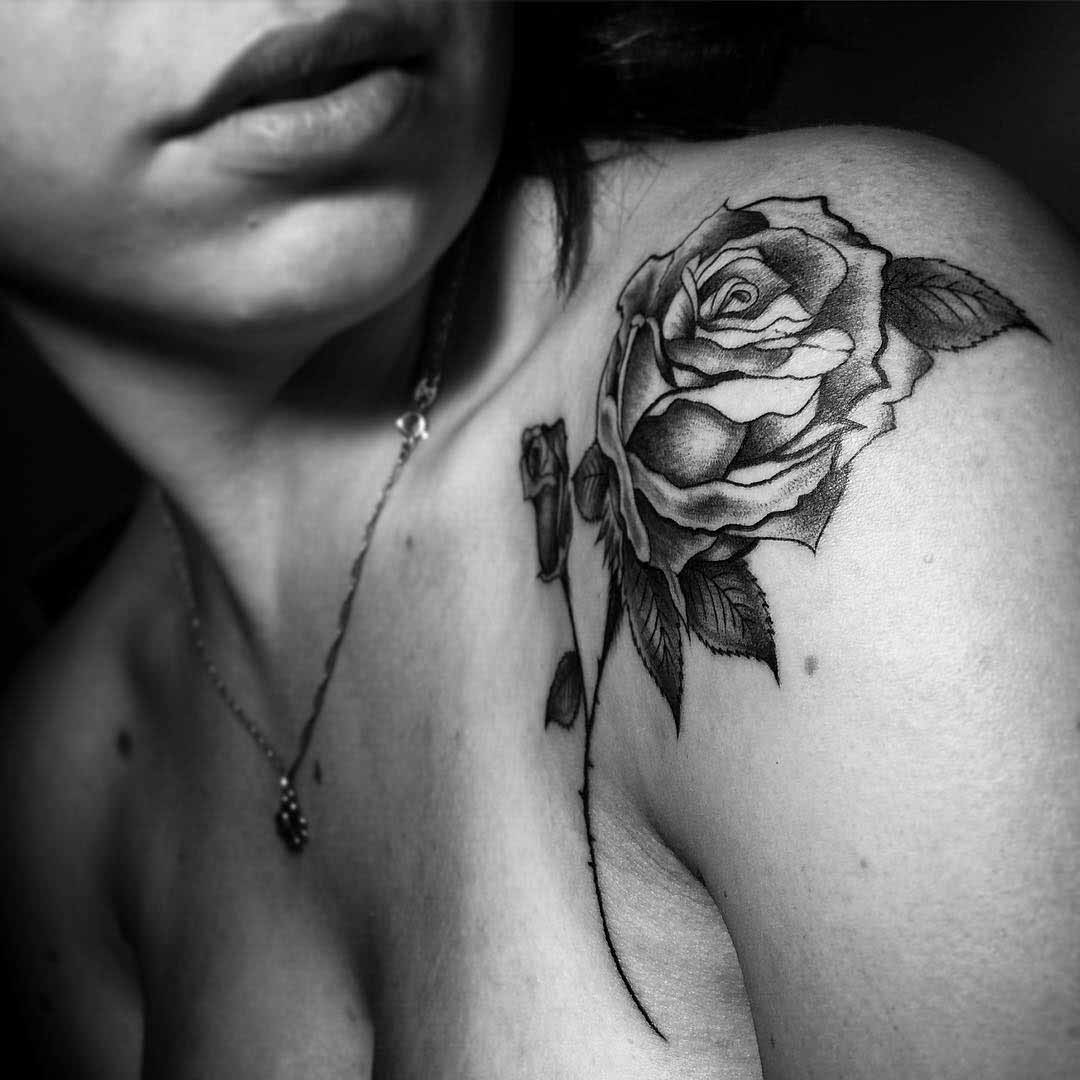 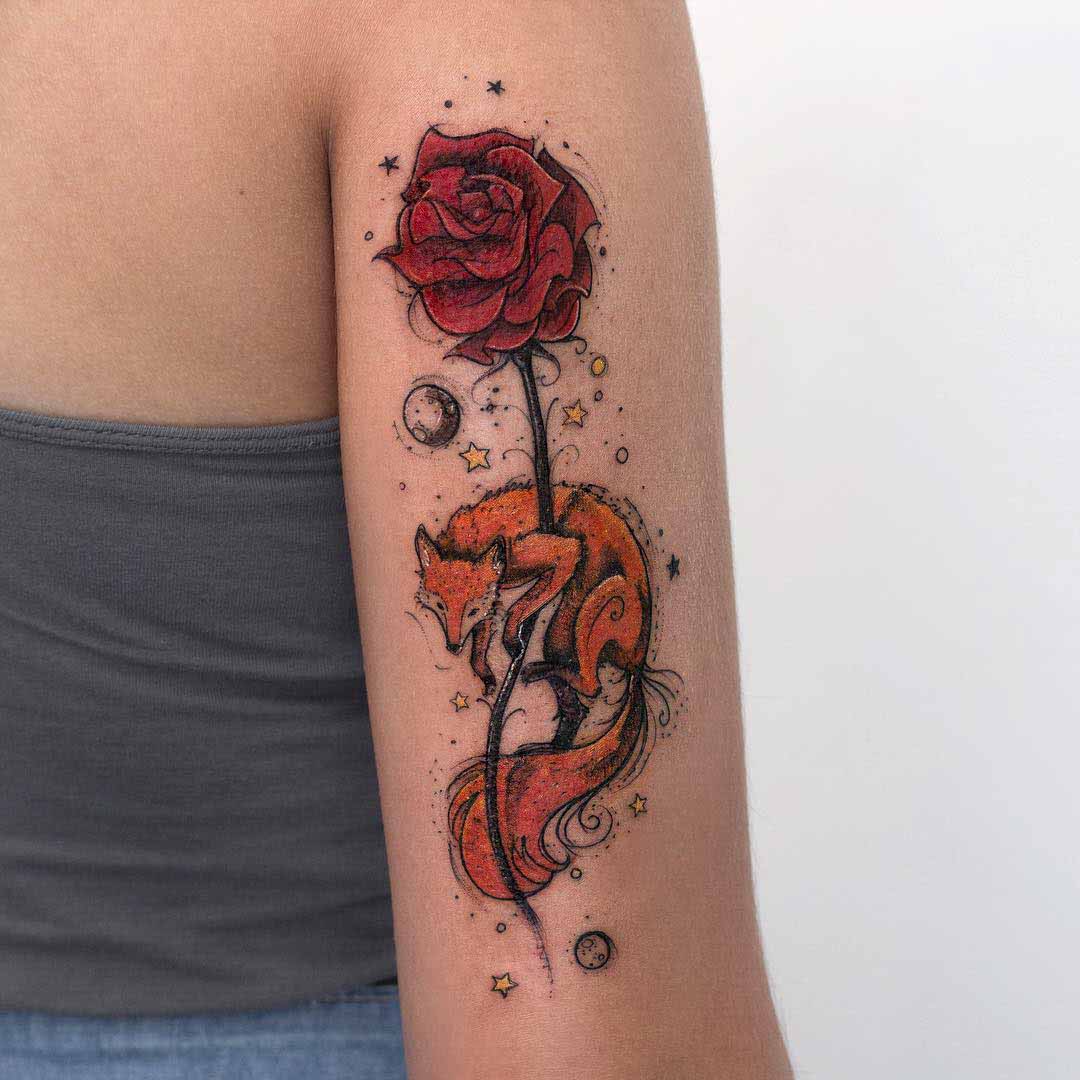 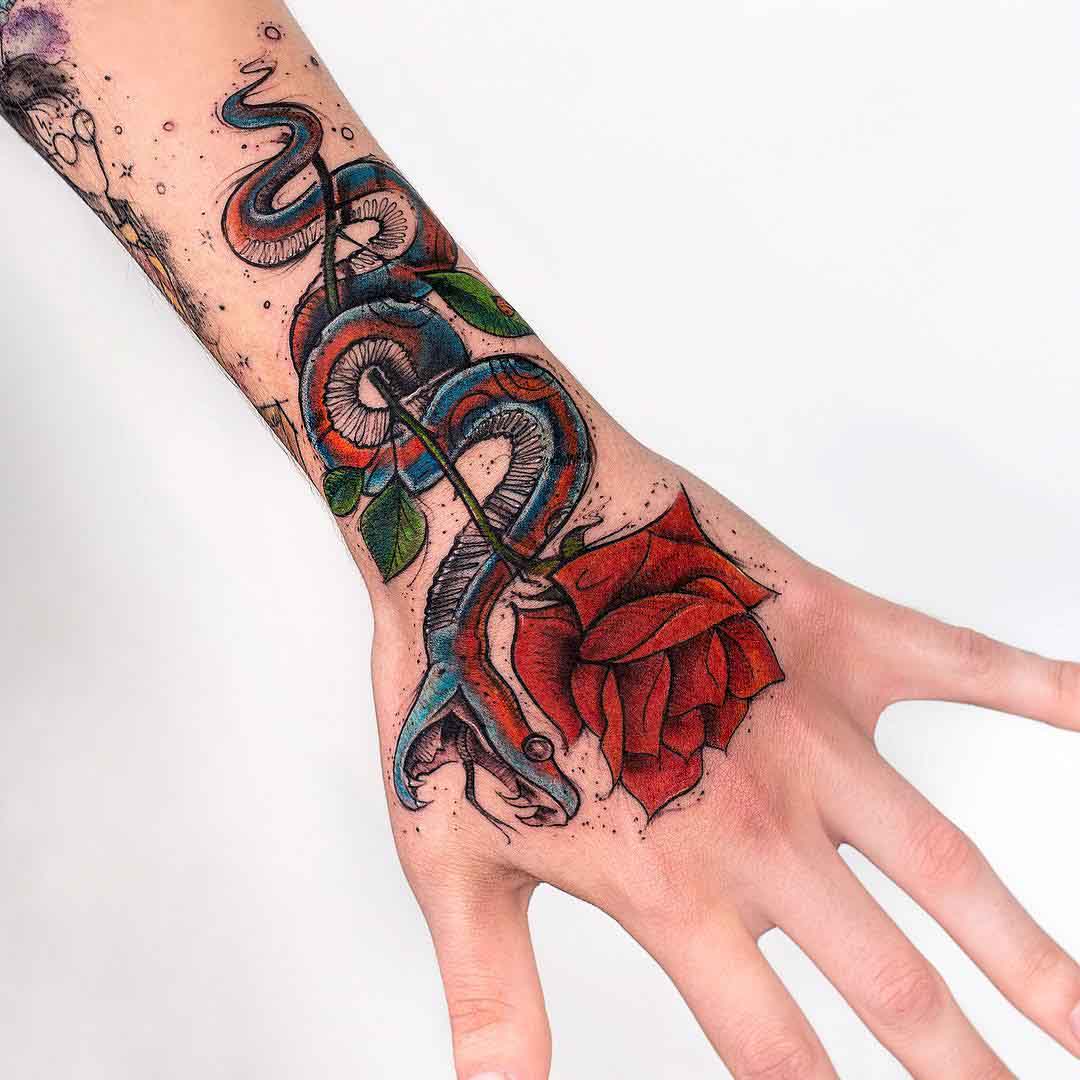 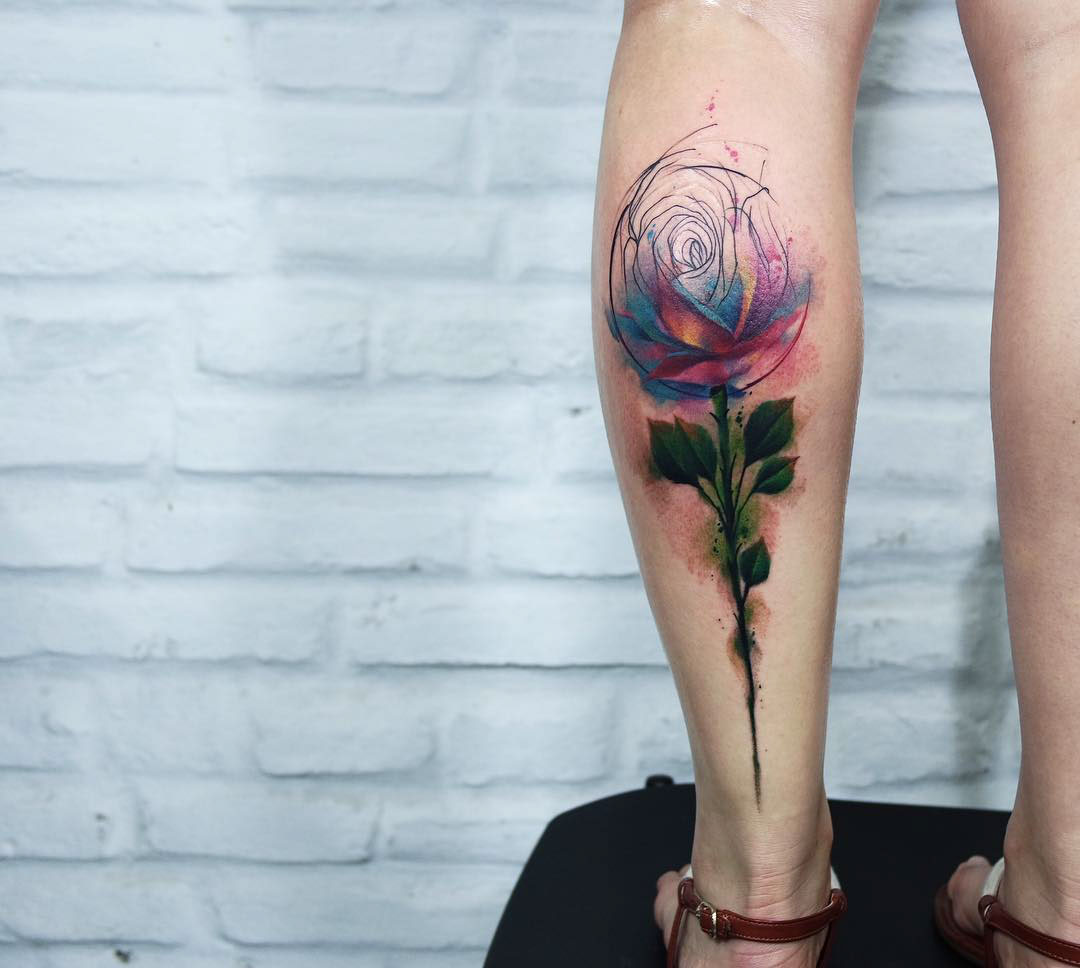 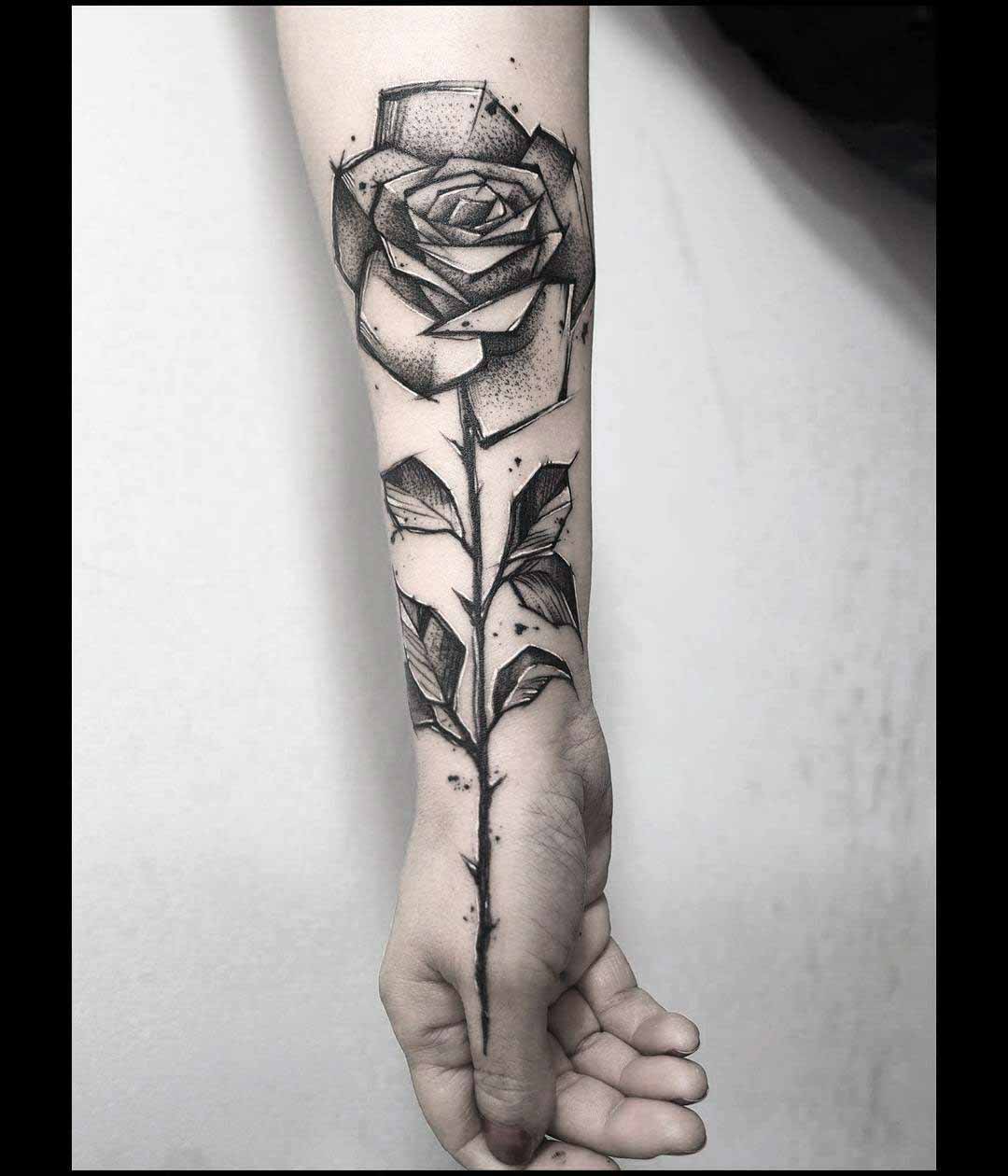