Traditional tattoo style is probably one of the most fashionable and popular trends in modern tattoo art. A lot of artists all over the work mainly in this style and a lot of them believe that the desire to make such tattoo commonly doesn’t come from one’s heart, but from the will to stick to the fashion. However, besides widespread of different butterfly, heart, ribbon and anchor designs, traditional style has its own rich history of development and meaningful essence.

The Origins of Traditional Tattoos

They are considered to appear for the first time in Europe and North America, so the style is sometimes also called the European tattoo. Sailors and naval captains were the first ones who began wearing such body drawings. Their dangerous occupation demanded some extra safety measures besides lifeboats and ropes, so sailors are used even nowadays to rely a lot on supernatural forces, charms, superstitions, religious symbols and other ritual stuff. Soon this practice evolved into making lifetime drawings of skulls, smoking-pipes, hearts, cruxes, and ribbons with names of beloved and family members on them etc. These tattoos were mainly colorful with a simple idea which was clear and obvious.

Sailors traveled to distant places all over the world and spread this new fashion of bright and beautiful body marks. So, the style became a matter of mass culture till nowadays.

Traditional tattoo ideas had also found their place and usage among crime elements and prisoners. They looked quite the same as civil ones, but their meaning differed a lot. They could denote the gang their owner was a member of, or told if he was imprisoned, how many times and for how long, the crimes he committed and many other useful things. Nowadays criminal tattoos are not so much connected with traditional style, so everybody is free to have one.

It is also worth mentioning that women prefer traditional tattoo ideas too. However, these are mainly not so brutal images, for example, butterflies, flowers, ribbons with quotation or words. Men remain faithful to good old nautical symbols – skulls, anchors, cruxes etc.

The most important thing is not to confuse traditional style with an old school which is characterized with thick black outlines and saturated bright even coloring.

This is a very recognizable style in the tattoo art. The style was started by an unknown sailor in XIX century and became a trend among other people of naval occupation who started depicting in their tats everything connected with their lives.

Everything happened the same as with traditional tattoos. These ones also served as charms with names of relatives and their portraits. Such drawings helped sailors be much more self-confident doing the3ir dangerous job and guaranteed safe returning to the land. They were also rather gambling people and played a lot of such games during long journeys, so there are a lot of old school tattoos covering this sphere of life – different cards, dice, money designs. Old school is now met all over the place on people of different life path and occupation and tattooists working in this style are easily found in every shop.

As it was mentioned earlier, these drawings are characterized with thick outlines and bright vivid colors. Big-sized works are not typical for the style; they are not realistic and life-like. The meaning of these drawing doesn’t matter too. Of course, they all used to have something to tell about tattoo owner and had some sense, but nowadays they serve basically the decorative purpose, an accessory. It depends on you whether to give your tattoo some special meaning, take it as a recall of something important to you, or just have a nice drawing on your body – both are acceptable.

These days old school tattoos are preferred by people who just love this bright and unsophisticated style. These images remind of the sea, traveling, journeys to distant places and dangerous adventures. In spite of the simplicity of the genre, these tatts still demand some skillful techniques for an artist to make them well. You do not just take the first guy with a tattoo machine from the street, you want to pick a good artist respected by the community with a lot of experience. 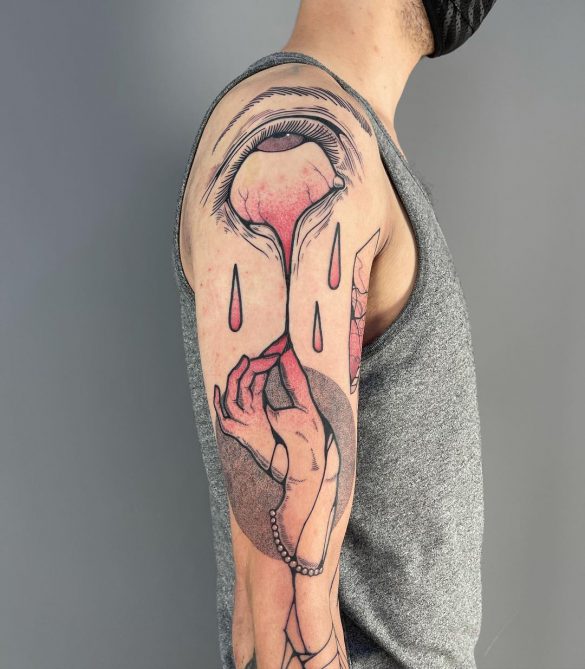 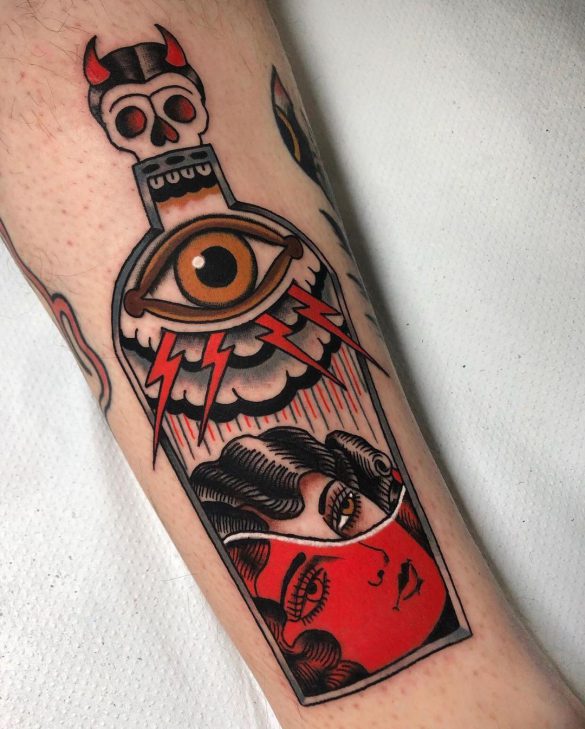 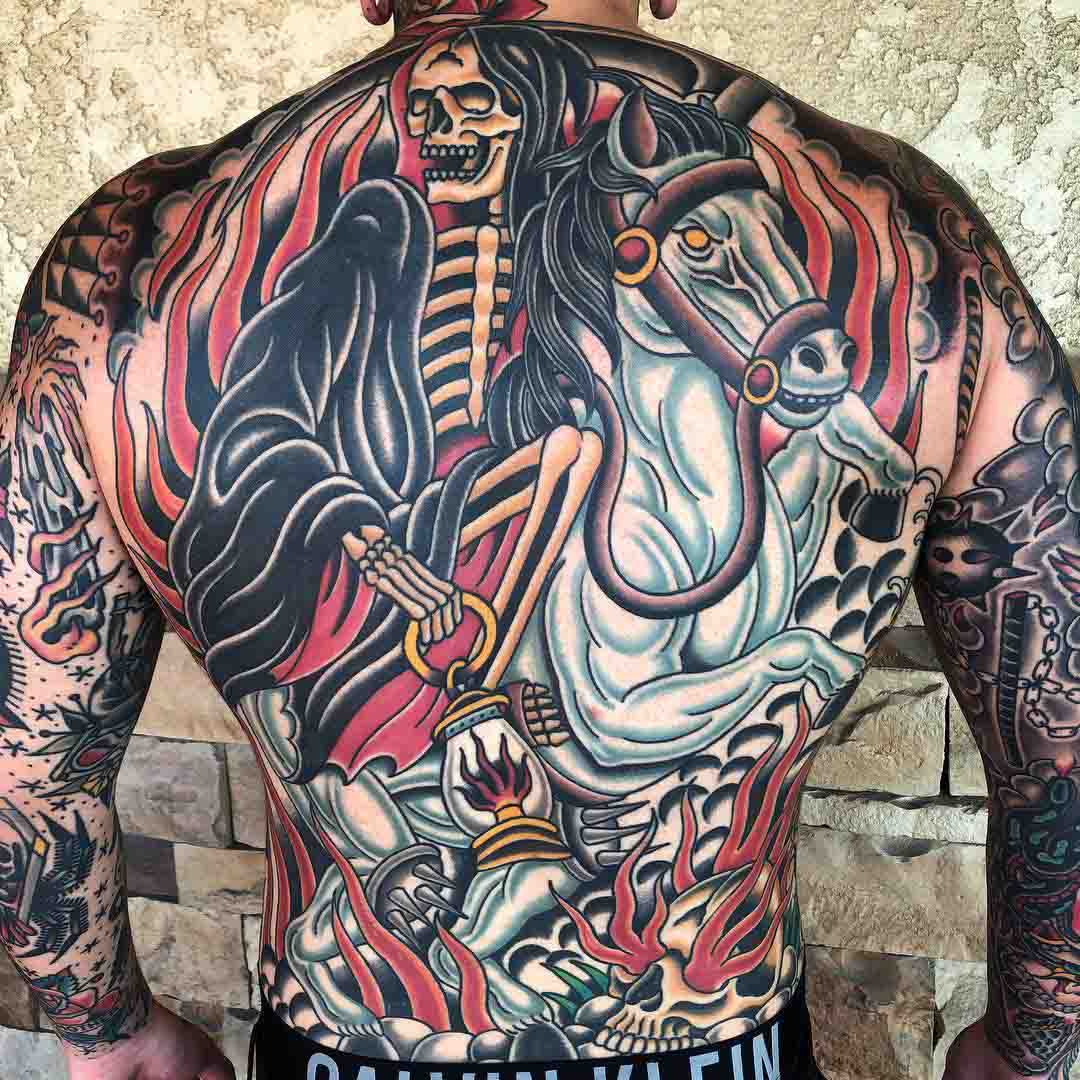 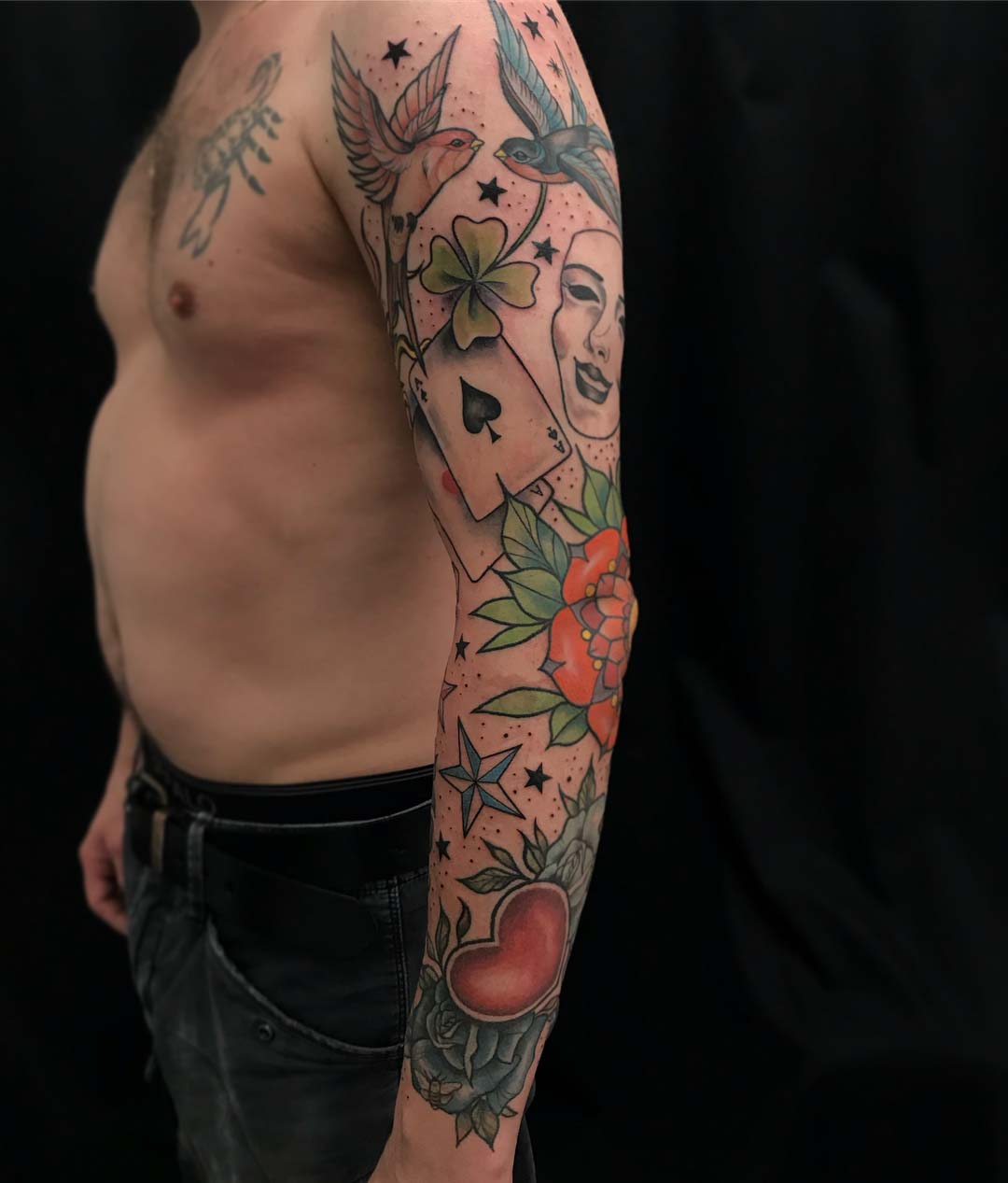 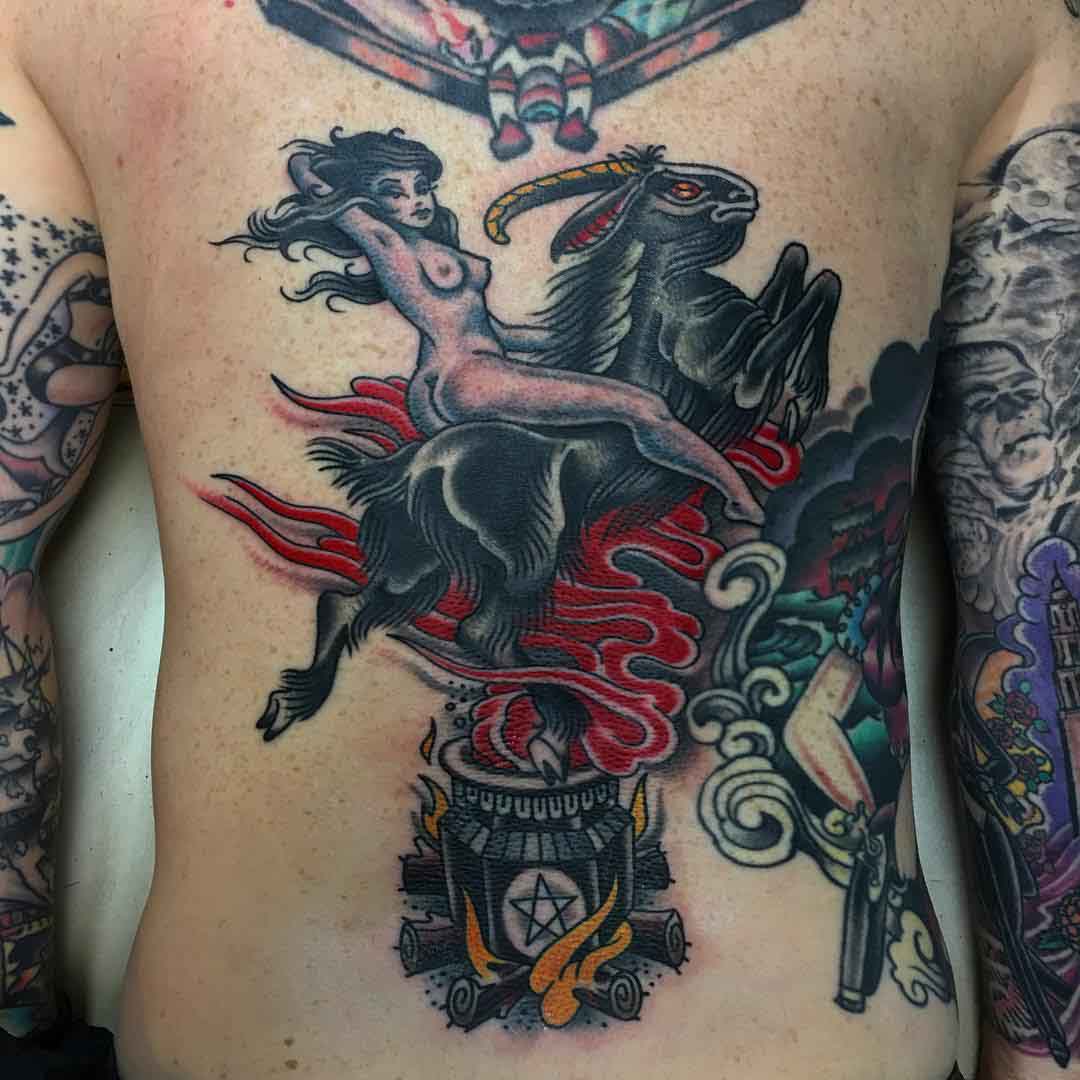 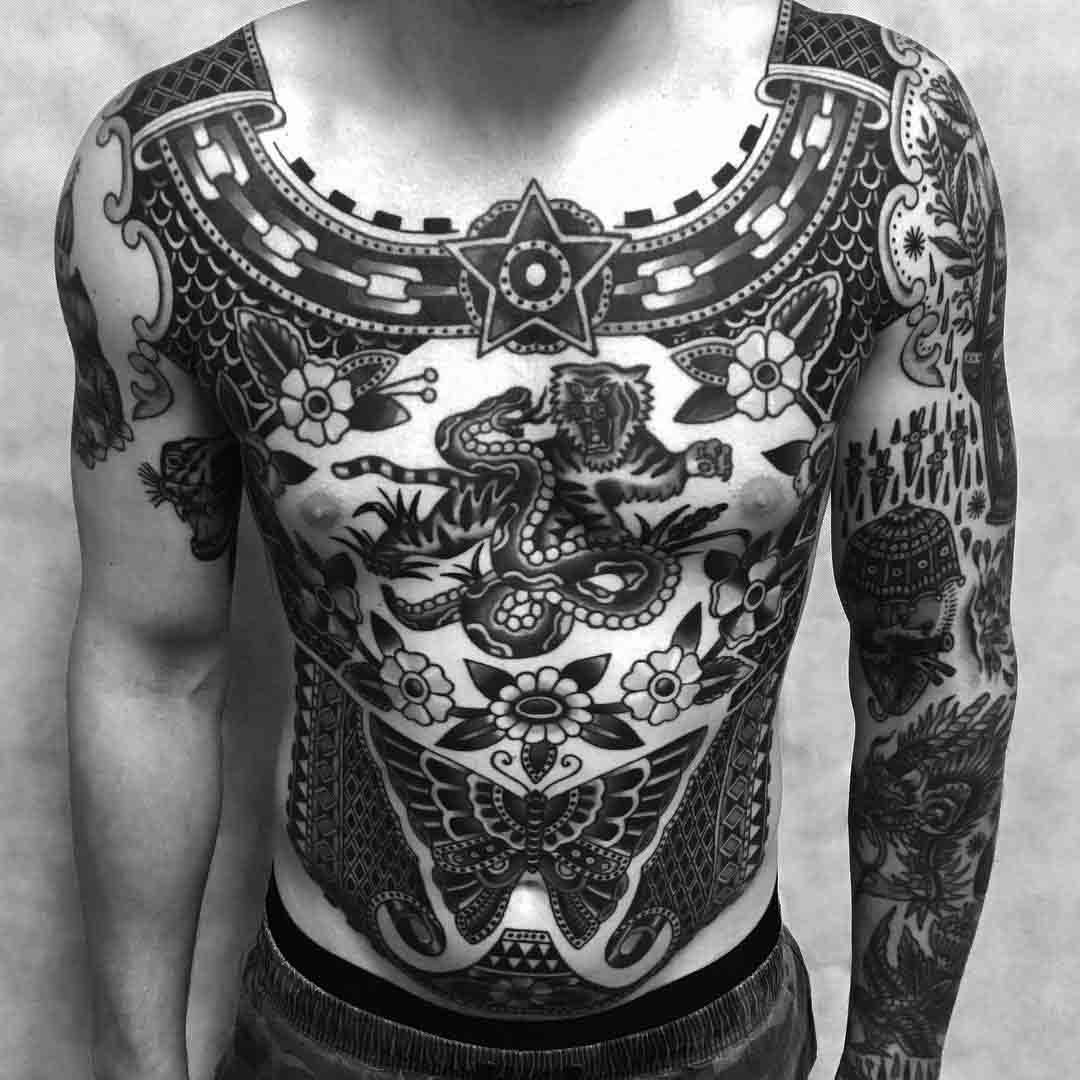 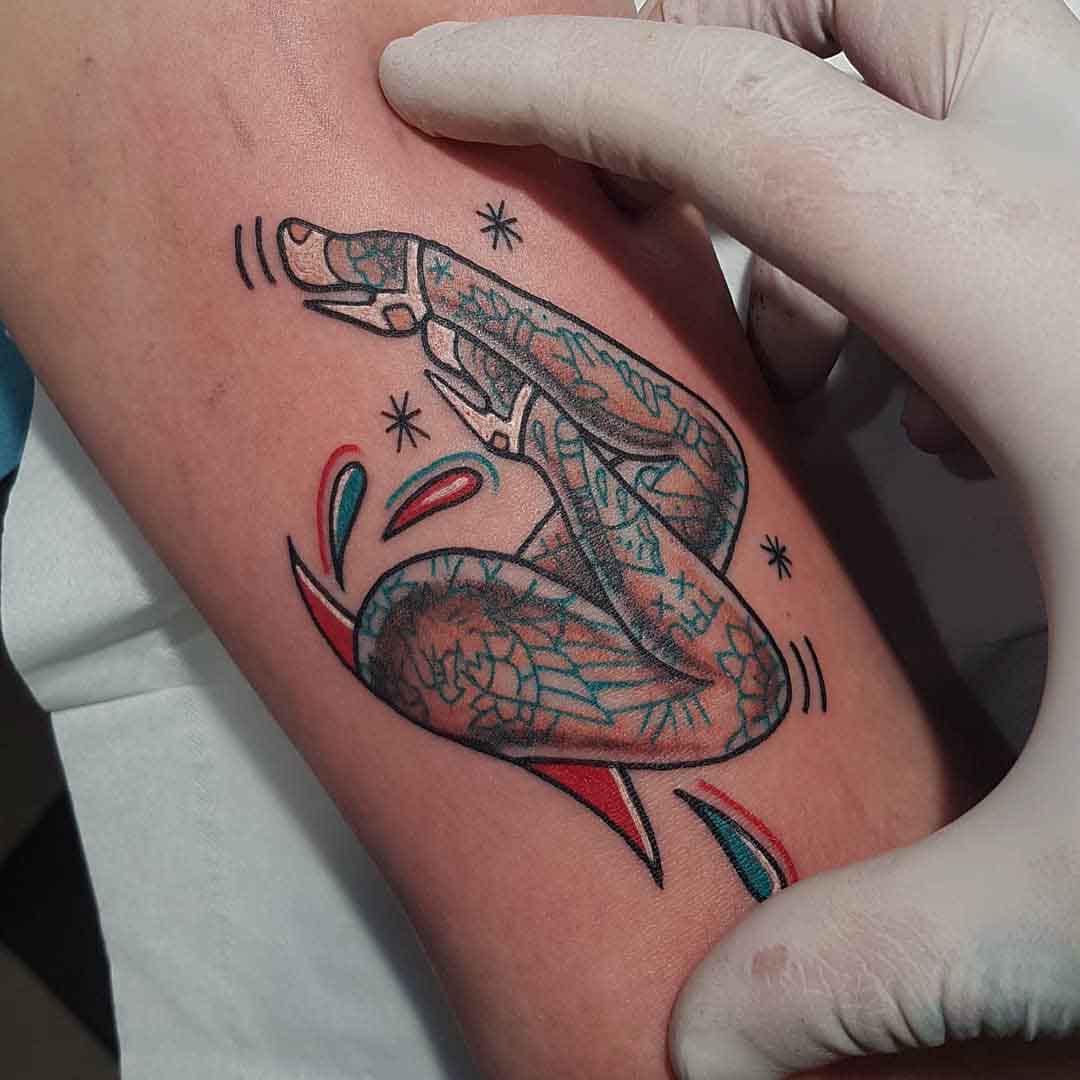 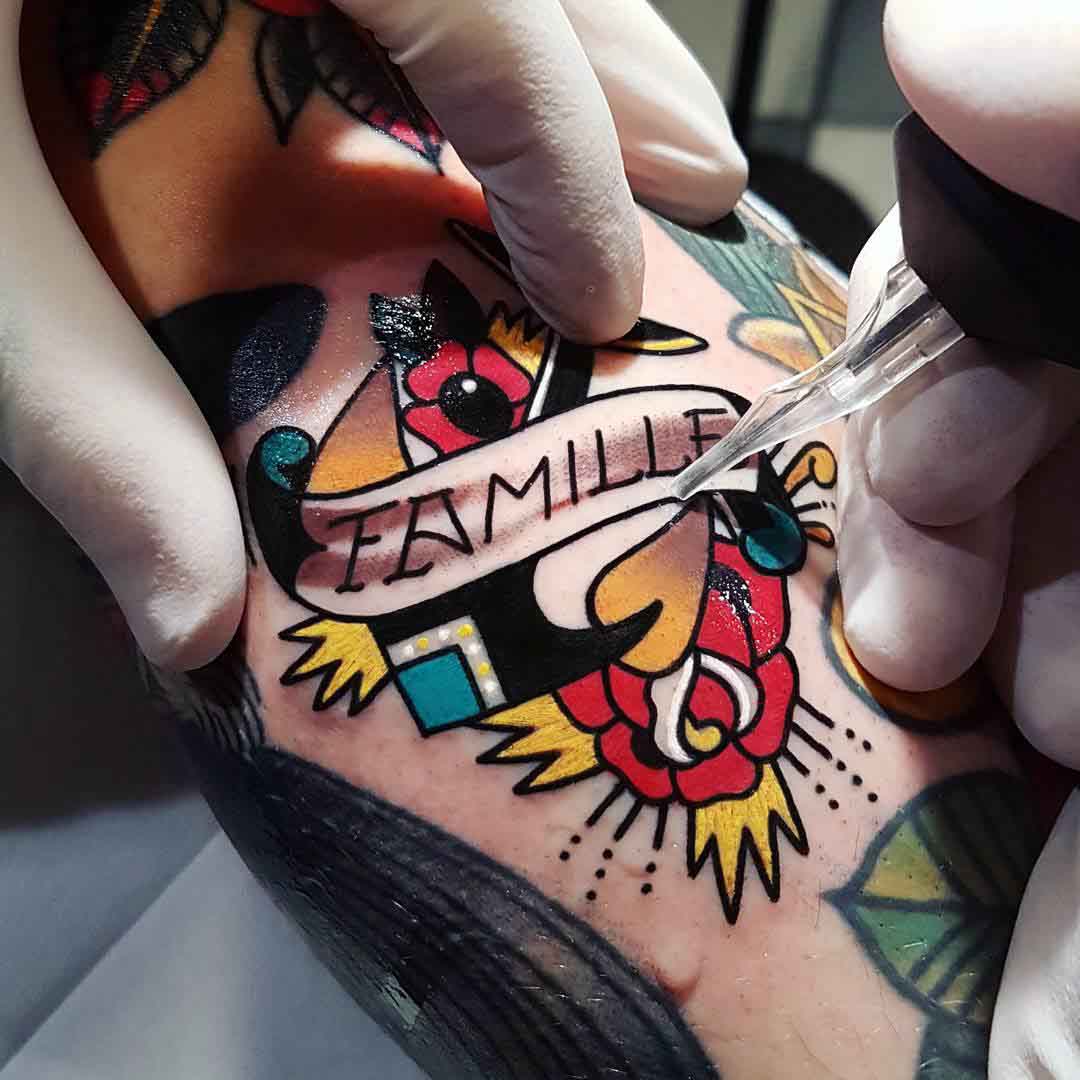 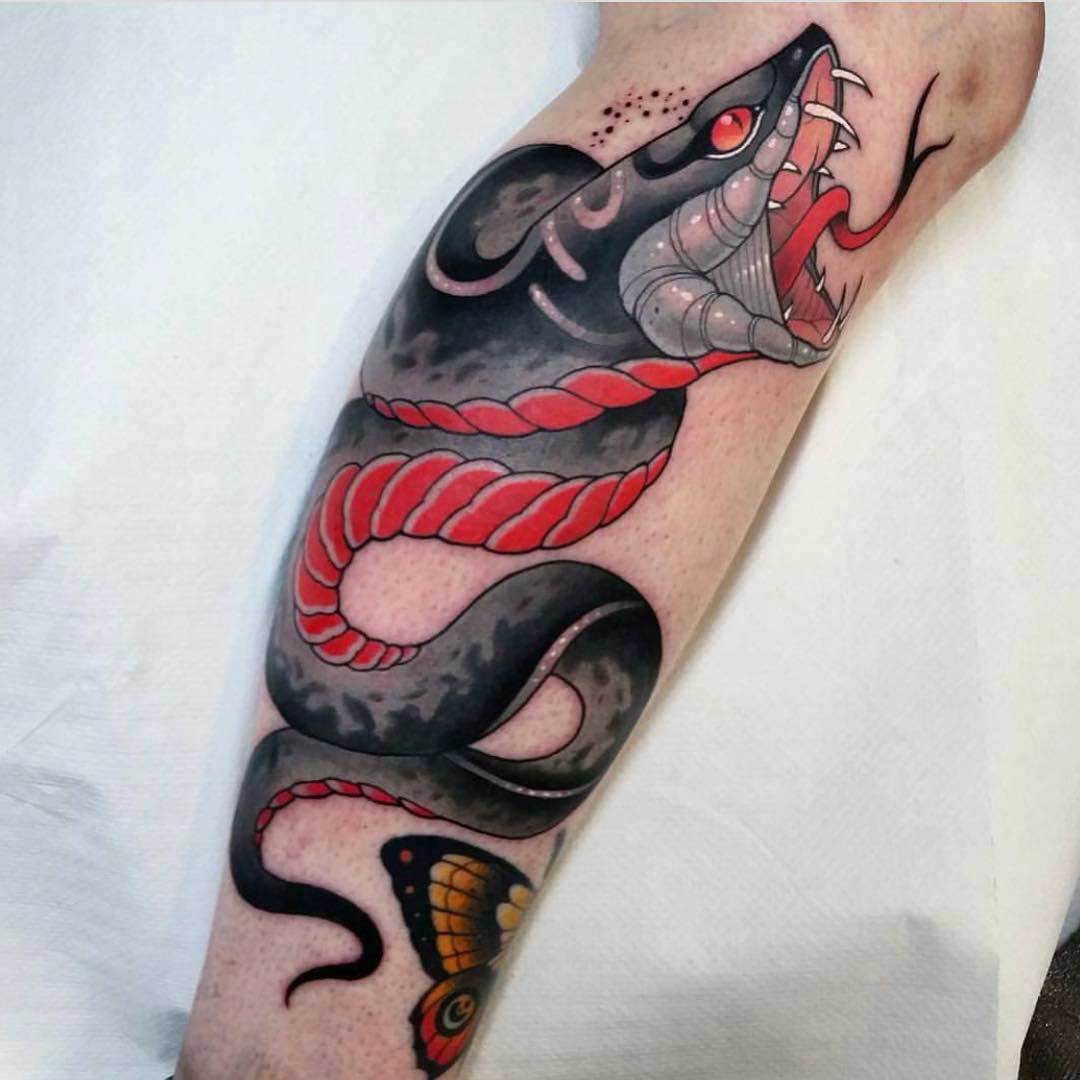 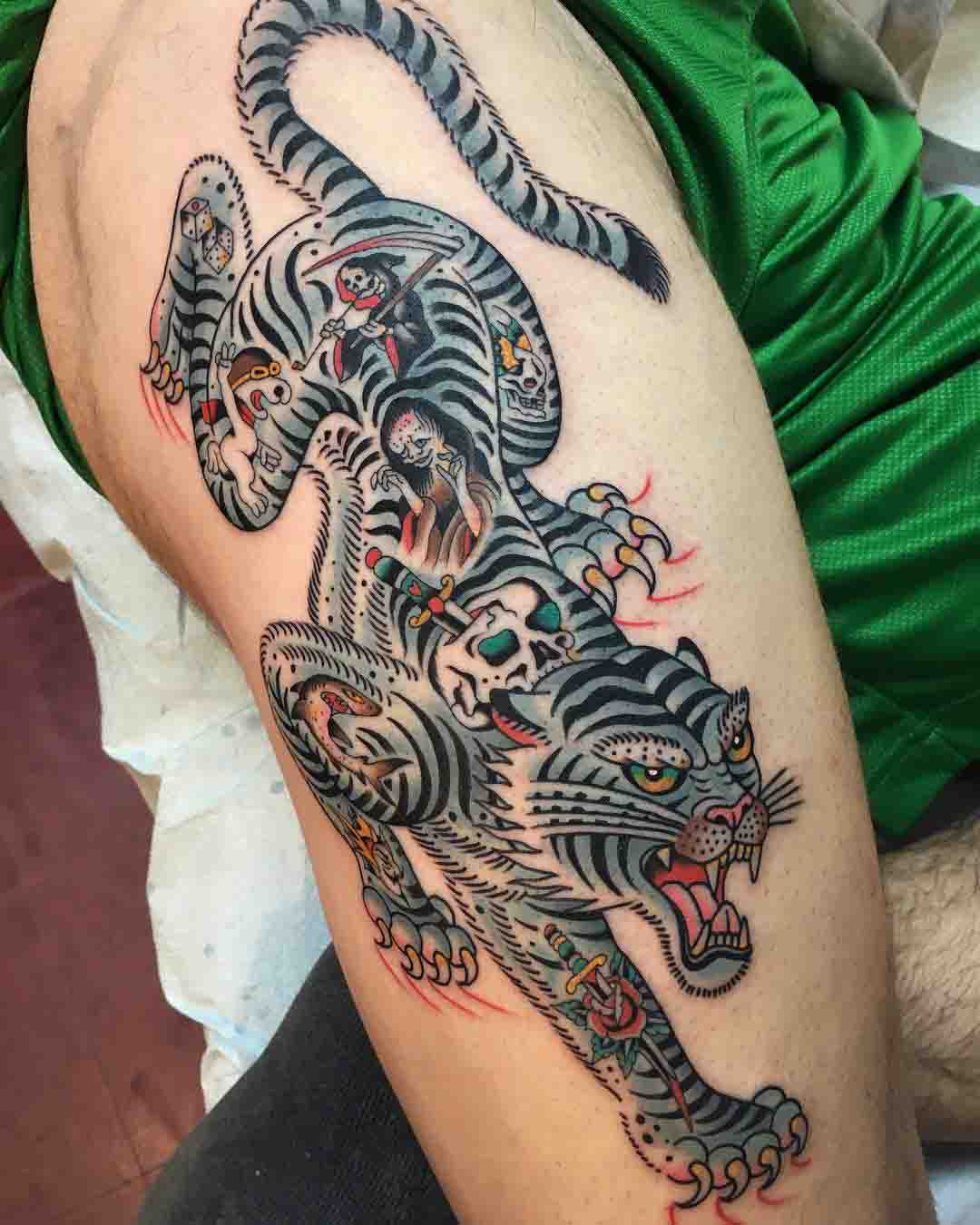 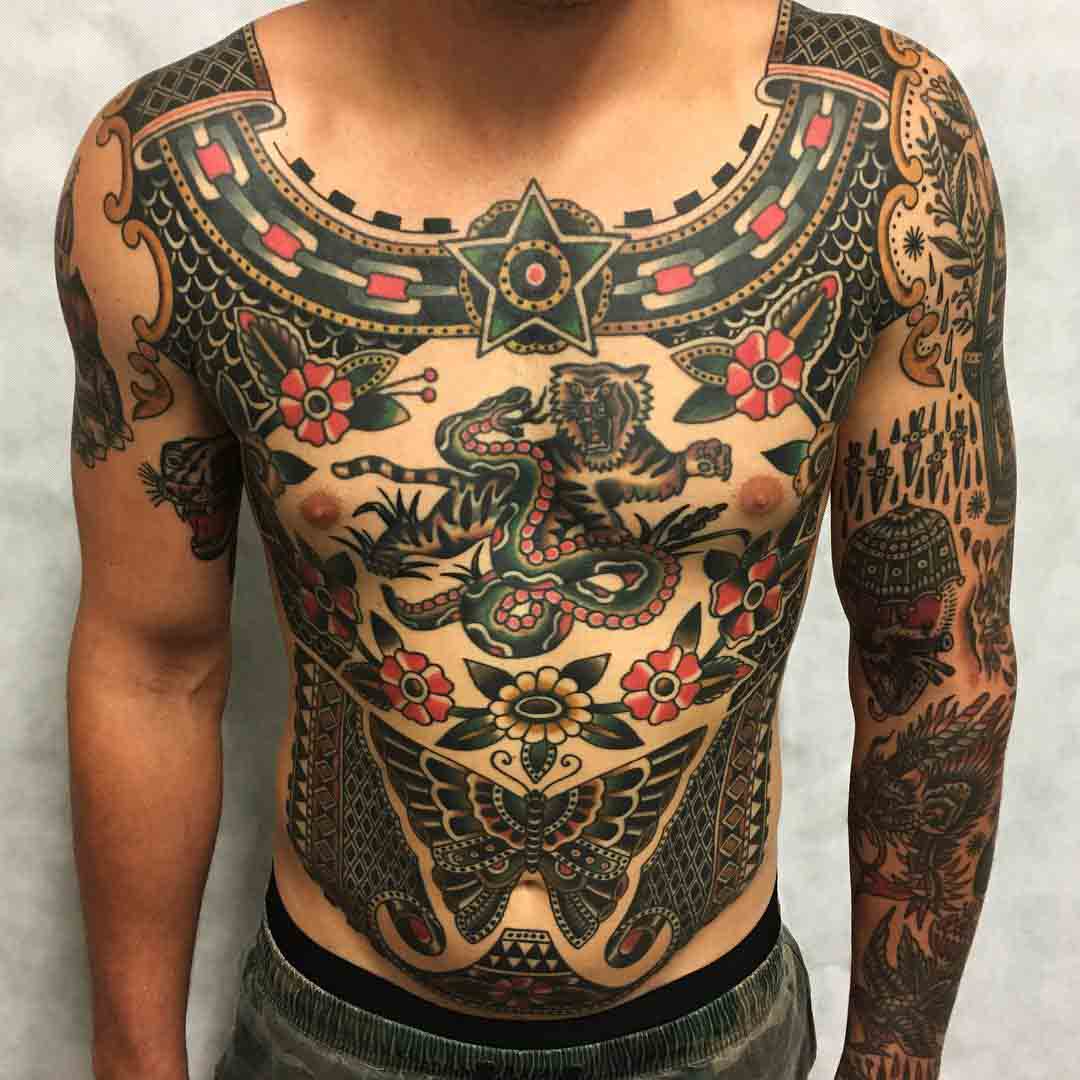 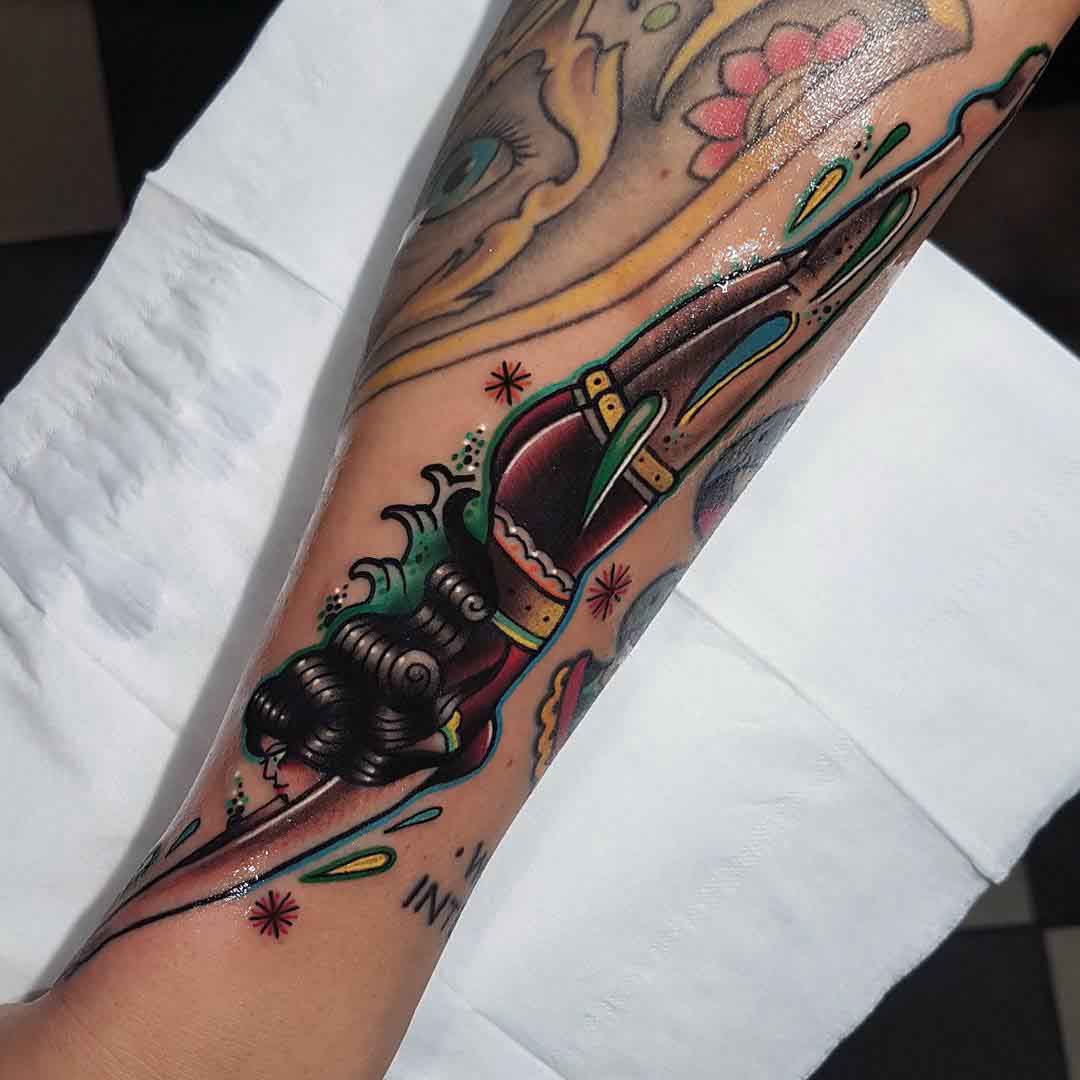 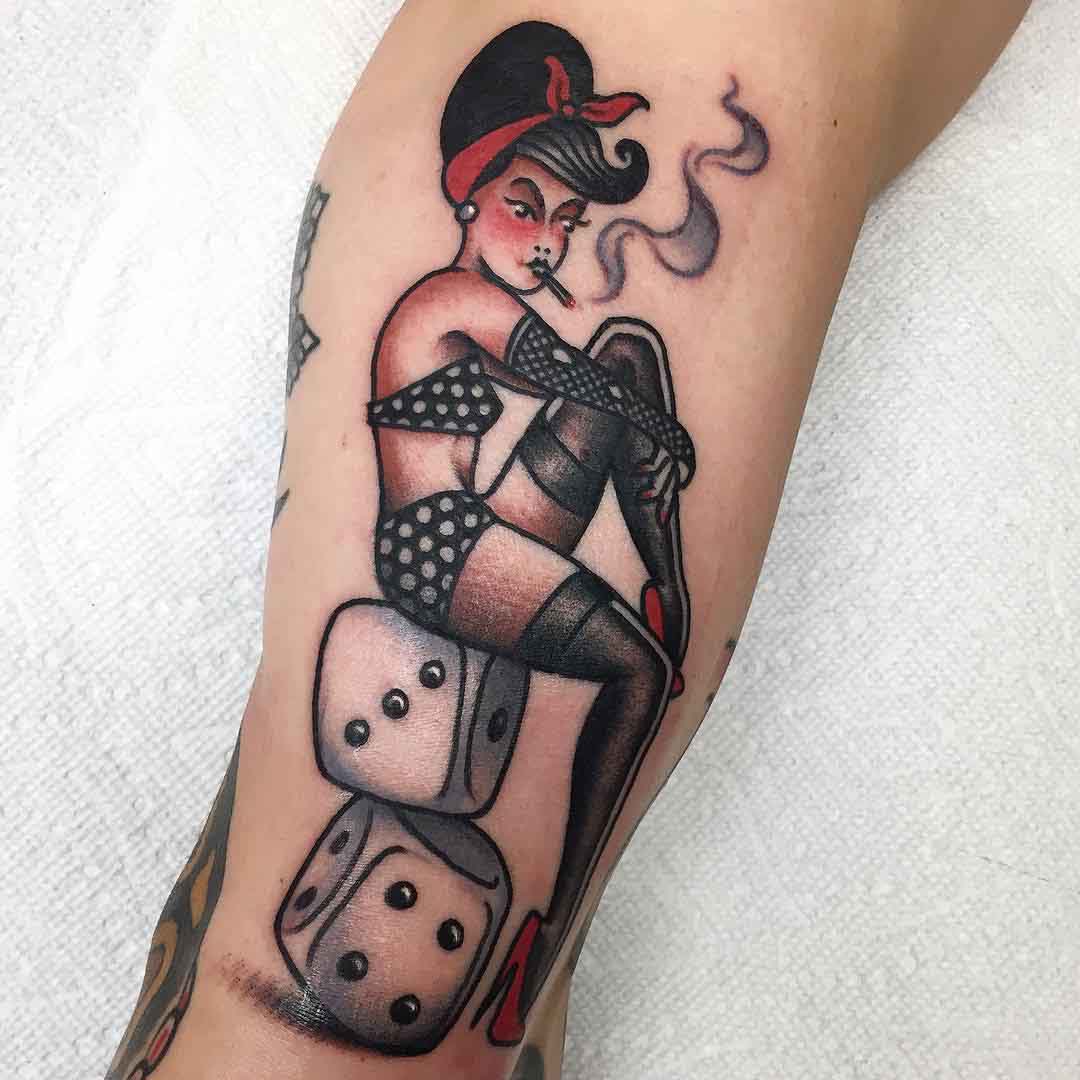 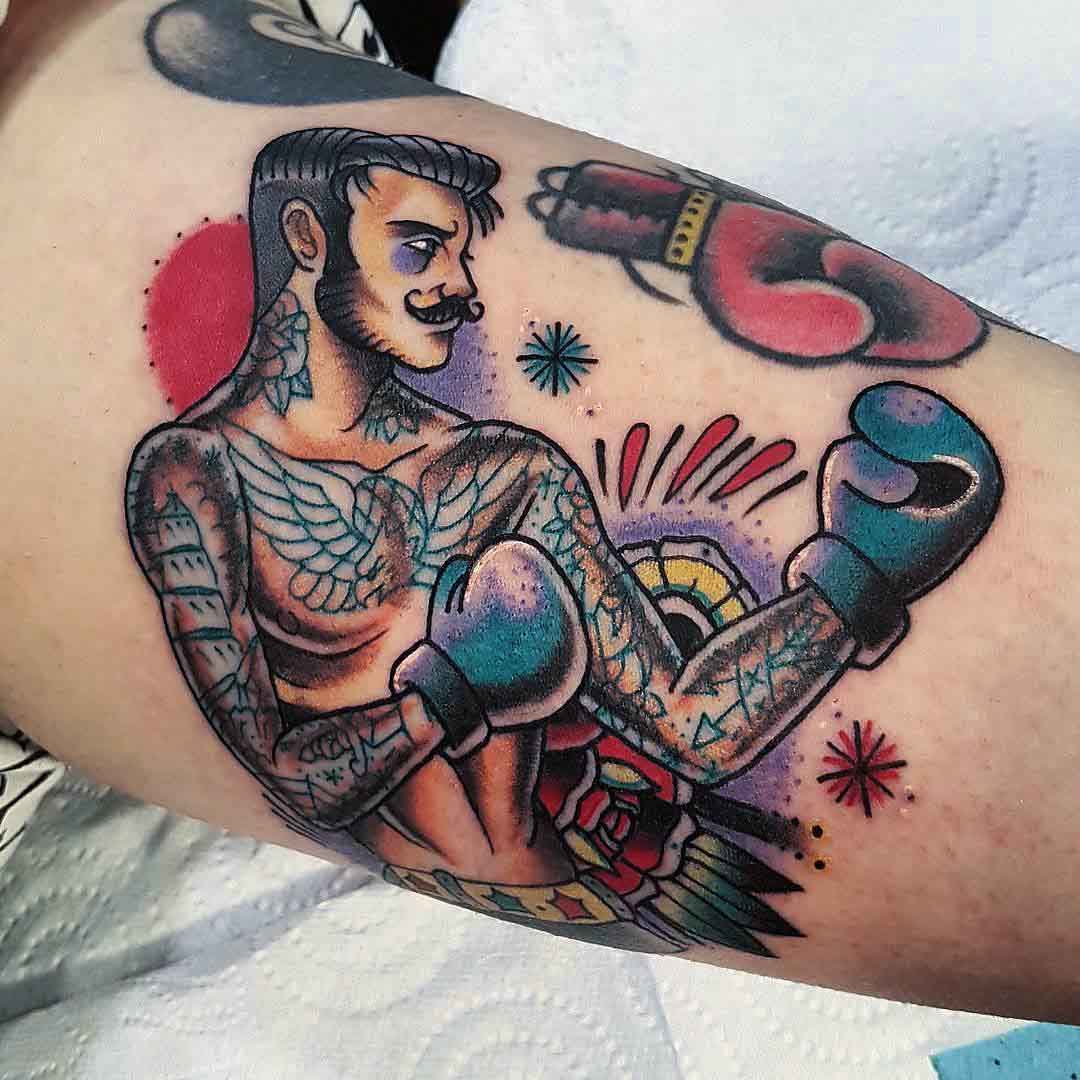 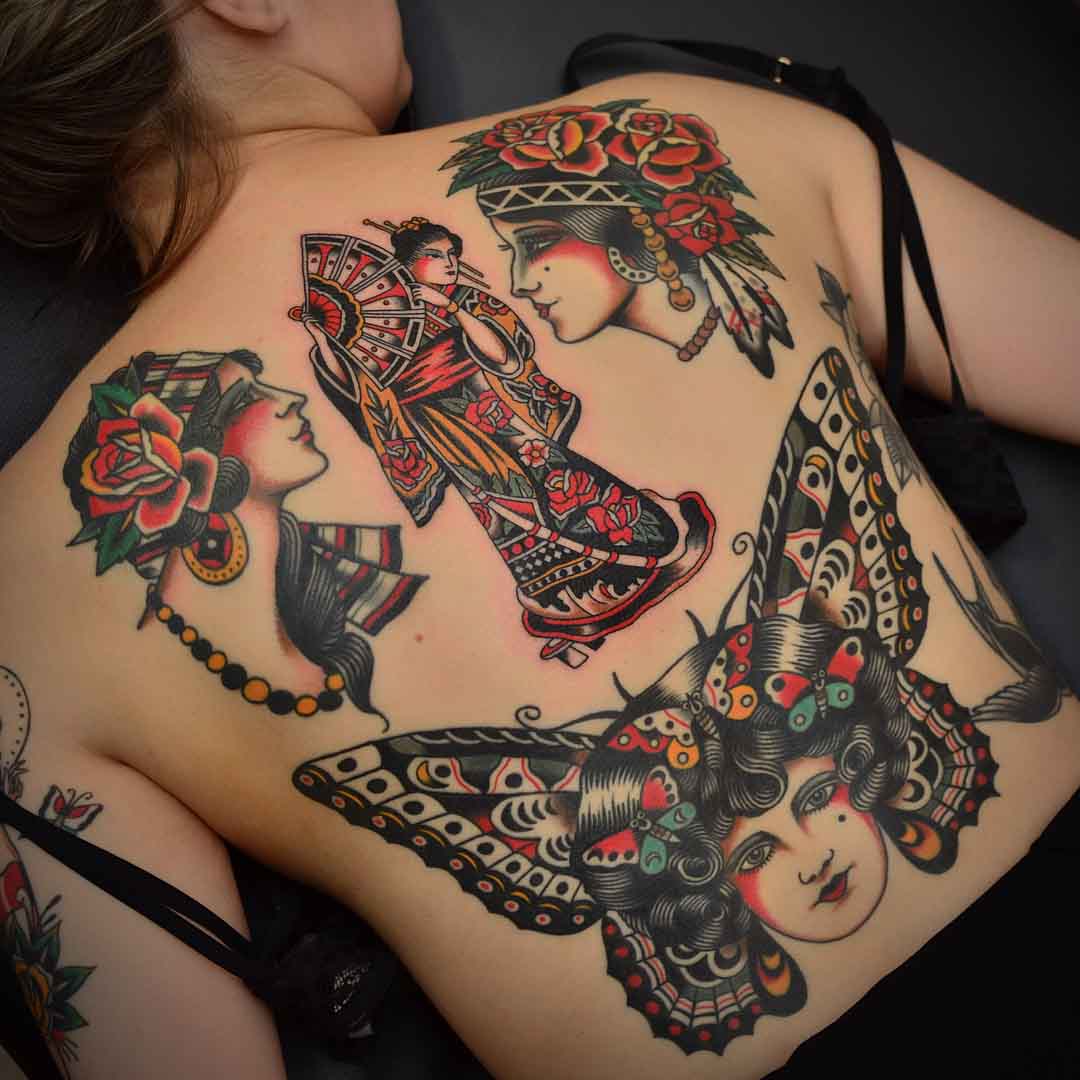 Several Traditional Tattoos on Back 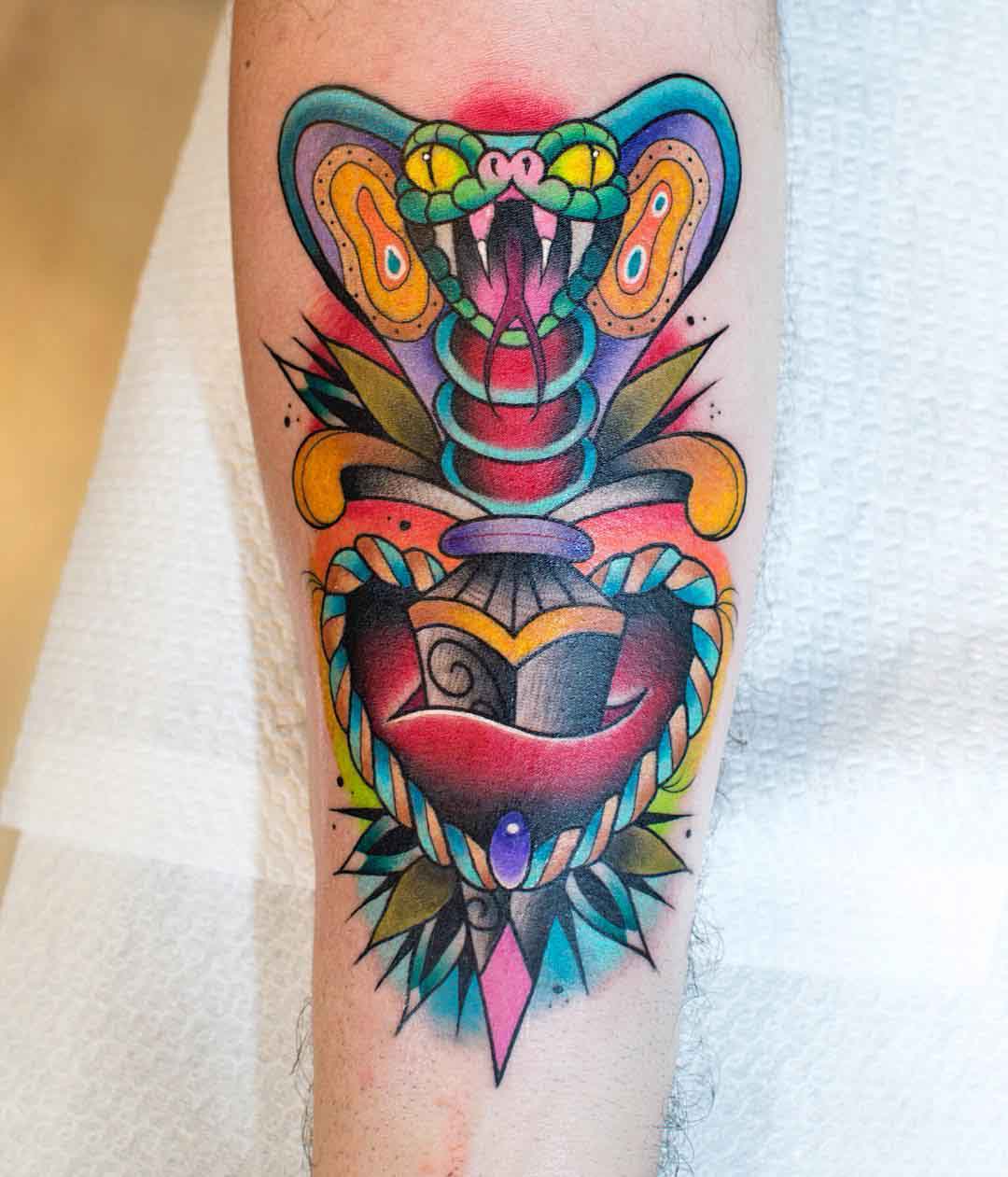 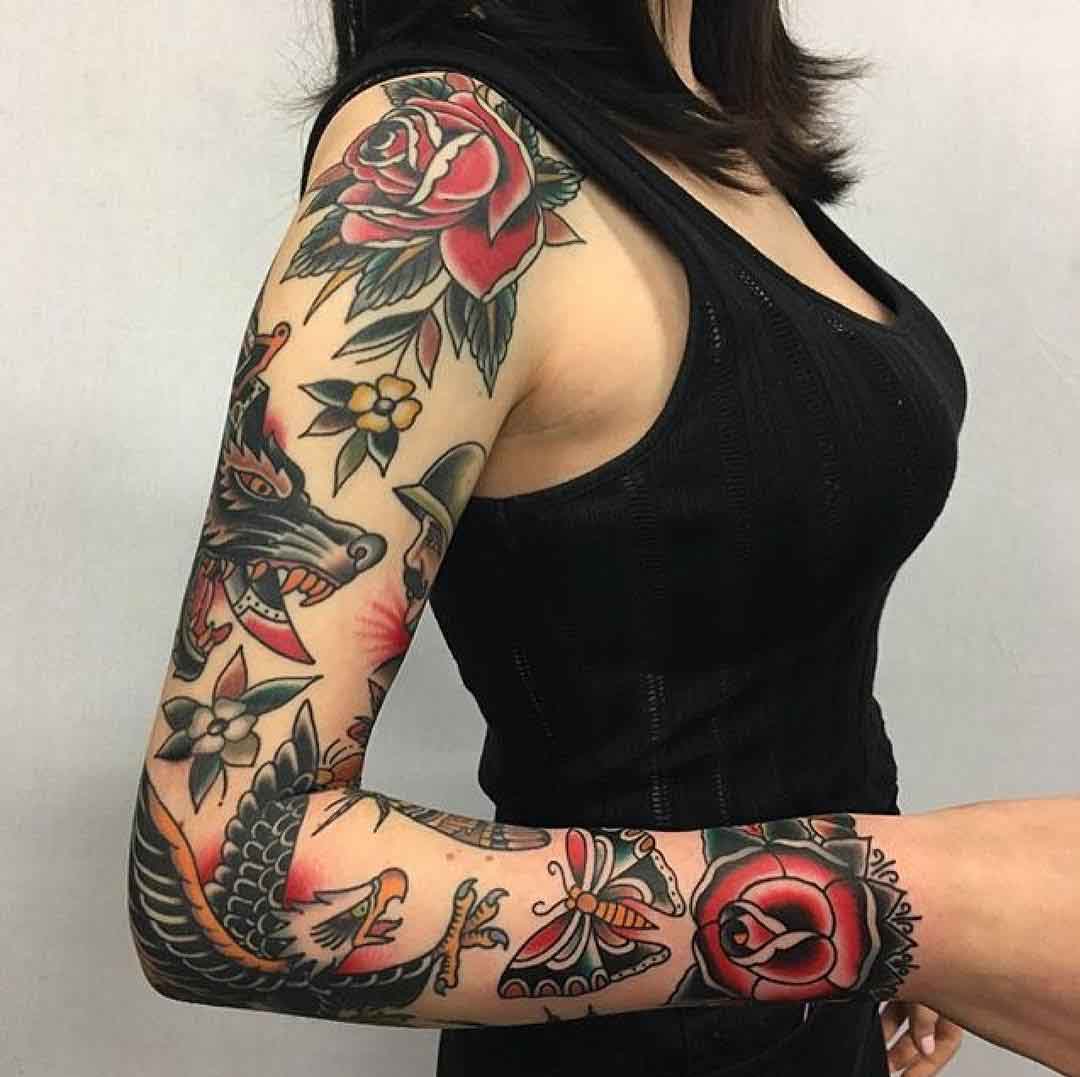